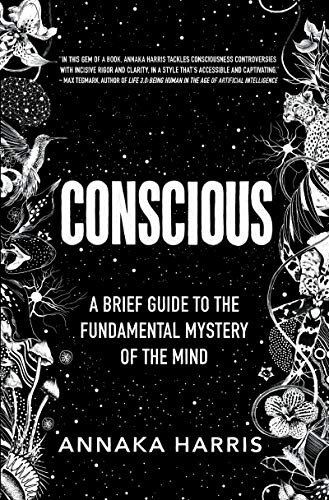 I recently read Annaka Harris’s “Conscious”, a book that explores some questions about consciousness. These questions include:

I liked the book so much that I thought I’d do a quick book summary.

How do we know other people or things are conscious?

Annaka defines consciousness as experience in its most basic form. But what external evidence is there that we can rely upon to determine if other people or things are conscious? Consider patients undergoing surgery who are actually aware of the procedure while under anesthesia. All evidence points to them being unconscious when they’re really not.

Or consider other patients who appear comatose yet are experiencing locked-in syndrome, completely aware of events happening around them.

What about complex behavior in plants and animals? Are they conscious too? How do we know they’re not having some sort of conscious experience even if what they experience might be less complex than that of a human?

Annaka reminds us of David Chalmers’ Philosophical Zombie thought experiment where we imagine everyone else doesn’t have consciousness but still behaves in the same ways and says the same things.

This thought experiment reminds me of the HBO series Westworld where the limits of artificial intelligence are pushed in some distant future. When the guests in the park interact with what seems like real people, why does one not assume the AI is experiencing anything?

If the guests didn’t know the attractions in the park were “not real”, would they be able to tell what’s real from what wasn’t? Would they assume consciousness in the android standing in the front of them? Annaka neatly summarizes the issue:

The problem is that both conscious and nonconscious states seem to be compatible with any behavior, even those associated with emotion, so a behavior itself doesn’t necessarily signal the presence of consciousness…when we trick ourselves into imagining that people lack consciousness, we can begin to wonder if we’re in fact tricking ourselves all the time when we deem other living systems - climbing ivy, say, or stinging sea anemones - to be without it.

Might everything in the universe be conscious to some degree?

She also dedicates a portion of the book exploring panpsychism, a hypothesis stating that all matter may have consciousness. There’s a lot of debate around this idea and Annaka stresses that although it might not be true, it shouldn’t be thrown out just yet.

The more prevalent hypothesis today is that consciousness emerges from some collection of matter but Annaka argues that this hypothesis describes matter from the outside and tells us nothing about what matter is like in the inside. She says:

Calling consciousness an emergent phenomenon doesn’t actually explain anything, because to the observer, matter is behaving as it always does. If some matter has experience and some doesn’t (and some emergent phenomena entail experience and some don’t), the concept of emergence as it is traditionally used in science simply doesn’t explain consciousness.

Do we have free will?

Along with Sam Harris, Annaka argues that free will is an illusion. She provides examples of parasites and bacteria influencing their hosts in ways that almost undoubtedly remove any notion of free will.

It’s hard to see how our behavior, preferences, and even choices could be under the control of our conscious will in any real sense. It seems much more accurate to say that consciousness is along for the ride - watching the show, rather than creating or controlling it.

She also argues that genetics, your immediate environment, and your life history all have an impact on the decision you thought you made:

It seems clear that we can’t decide what to think or feel, any more than we can decide what to see or hear. A highly complicated convergence of factors and past events—including our genes, our personal life history, our immediate environment, and the state of our brain - is responsible for each next thought.

Of course, she also mentions the experiments conducted by Benjamin Libet where researchers used an EEG to detect when a subject was going to move half a second before the subject feels they make the decision to move.

Lastly, Annaka brings up the split-brain experiments where patients who suffer from epilepsy undergo a corpus callosotomy. Essentially, the connection between the right and left hemispheres of the brain is severed and results in what appears to be two different entities each having its own will and intentions and occasionally sabotaging each other. In this scenario, what does free will mean?

Should you read it?

I think so! Annaka’s clear writing makes the topic very enjoyable to read about and extremely thought-provoking.