Although linear regression models tend to be considered as a classical form of statistical modeling, it still remains to be widely deployed in many branches of science as a foundational tool to better understand data. A lot of online articles tend to either focus on just theory or take the other extreme of just writing a few lines of code to throw data at. As in most things in life, there’s a balance which I hope this post achieves.

To understand a more complicated topic, it’s best to start with a simple problem whose insights can be scaled to much larger problems. In this spirit, let’s say you have a few data points: $(2, 3), (7, 4)$, and $(9, 8)$. We call each point and two-dimensional point since each point has two numbers. Using Python, you can easily generate and plot these points. 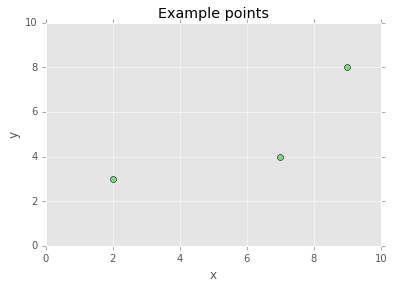 Solving the system of equations

and for each point you’ll get the following system of equations:

Each $\beta_0$ is the coefficient for the intercept term (which is implicitly set to 1) so that by adjusting $\beta_0$, you can move the line up or down.

Since you might have much more data than the three points we have above, you’ll want to represent this system of equations in a way that is more computationally efficient for your computer to crunch. This can be achieved by using linear algebra notation:

We call $X$ the design matrix and $y$ the observation vector.

Now solve the system of equations! You can easily do this by using the row-reduced echelon (RRE) algorithm which is easily handled in Python.

Estimate $\beta$ by projecting $y$ onto the range of $X$

There are two ways you can do this:

One can also see the use of Pythagorean’s theorem at play here.

For this regression model, you want to show that the residual vector, $\epsilon$, is minimized with $\hat{\beta}$. To show that, you need to minimize the sum of squared errors which translates to minimizing $||y - X \beta||^2$. But to show $\beta$ is our best candidate, you need to start with an arbitrary candidate for our sum of squared errors, $|| y - X \gamma||^2$.

And there you have it! $\hat{\beta}$ is the vector containing each of the coefficients you were trying to find for your linear model and represents the closest thing we can get to a perfect solution.